Kuching, officially the City of Kuching is the capital and the most populous city in the state of Sarawak in Malaysia. It is also the capital of Kuching Division. The city is situated on the Sarawak River at the southwest tip of the state of Sarawak on the island of Borneo and covers an area of 431 square kilometres (166 sq mi). Kuching has a colonial charm blended with the traditional, stunning architecture, an attractive waterfront and a charismatic Main Bazaar. Check out the top things to do in Kuching to experience the city’s history, culture, and some of the best parks in Borneo. Just a 35 minute drive outside of Kuching will take you to the Sarawak Cultural Village where you can learn all about the different indigenous groups that live in this part of Malaysia, as well as take in a range of local crafts and buildings.

There are live demonstrations which will teach you ancient techniques such as weaving, bamboo carving, and bead making and you can also tour this model village and check out all the architecture.

Just some of the sights on offer include a traditional Chinese farmhouse as well as a Penan hut, Iban longhouses, and a Malanau Tall House and the site sprawls over 17 acres so there is a huge amount to see and do here if you fancy an easy day trip out of the center of Kuching. Astana is the Malay word for Palace and this iconic building dates from 1870 during the time of Charles Brooke who was also known as the Second White Rajah of Sarawak.

The Astana is now the official home of the Governor of Sarawak but it was originally built as a wedding gift for Ranee Margaret, the wife of Charles Brooke.

The complex is made up of three different bungalow areas which are joined by walkways and the Astana enjoys panoramic views over the waterfront of Kuching.

As this is an official state residence however, visitors are not permitted to enter the Astana grounds and you will have to make do with admiring this historical gem from afar.

A small wooden mosque once occupied the site of today’s Kuching City Mosque for more than a century until the present structure opened in 1968. Combining elements of Western, Italian and contemporary Islamic styles with shiny golden domes, the mosque makes an idyllic photograph. Non-Muslims can enter outside of prayer times. Enjoy the view of Kuching City Mosque, formerly the State Mosque of Sarawak, from the river at sunset.

4.Enjoy the Beauty and Serenity at Kuching Waterfront 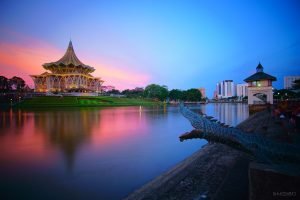 The attractive waterfront opposite Main Bazaar is a regular among the best things to see in Kuching. A boardwalk stretching for approximately one kilometre (0.6 miles) hugs the Sarawak River. Visitors can stroll along and admire the views of the river, snap photographs of the Astana and Fort Margherita and soak up the Kuching culture. 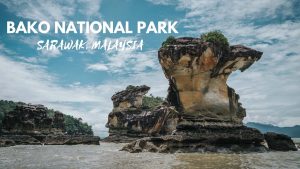 Bako National Park has the claim to fame of being the oldest national park in Sarawak and sprawls across almost 3,000 hectares of land.

This however actually makes it one of the smallest parks in Borneo in terms of its area which means that it is easy to visit as part of a day trip from Kuching and you can still manage to see a lot of the park in a short space of time.

The park lies on the Sarawak and Bako rivers and has an impressive seven different eco-systems within its boundaries including towering cliff sides and mangrove swamps. Most visitors overlook one of Culture Trip’s favourite things to do in Kuching. The 15-acre Orchid Gardens houses more than 75,000 plants, flowers and 82 species of orchid. The park itself splits into a nursery and display area, and includes Sarawak’s state flower: the Normah Orchid. Orchid Gardens sits on the northern bank of the river near The Astana and Fort Margherita. Take the Penambang, or wooden boat, across the Sarawak River from the waterfront. 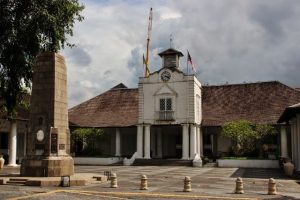 The Old Courthouse is now actually the building that houses the official Sarawak Tourism Complex and dates from 1871. The complex is a great spot for history buffs to visit as it includes a wealth of interesting buildings such as a clock tower built during the colonial period in the Baroque style as well as a Renaissance Pavilion which is now used as the Textile Museum.

You can also explore the Round Tower which was constructed in 1886 and would have been a fort before becoming a dispensary as well as a memorial in honor of Charles Brooke.

The complex is conveniently located next to the main promenade in Kuching so it makes a good place to go for a stroll and take in the views over the water at the same time.

8.Spend the Day at Damai Beach

Damai Beach, located approximately one hour from Kuching, has some of the most impressive views in Borneo. The sandy beach overlooks the South China Sea against the backdrop of dense jungle and Mount Santubong. Damai Beach Resort maintains the space in excellent condition, providing a romantic spot for the sunset.

Many people on a visit to Kuching travel to the nature reserves in the hope of seeing orang utans and other forms of indigenous wildlife.

At Gunung Gading National Park however, the big draw is the flora rather than the fauna as this is one of the spots where the famous and rare rafflesia flower grows.

Rafflesia are known for being the largest flowers in the world and they bloom at the park throughout the year, so there is a good chance that you will be able to spot some no matter which time of year you visit.

As well as admiring the flowers you can also spend time in the park checking out the lush jungle trails and taking in the pretty waterfalls and tinkling streams.

If you are feeling energetic then you can even scale the peak of Gunung Gading Mountain.

The park is around 2 hours away from Kuching so it is possible to visit it as part of a day trip.

Semenggoh Nature Reserve is around 40 minutes outside of Kuching so it is easy enough to visit as part of a day trip.

The reason that visitors flock here is to see the orang utans and the center had a rehabilitation program that lasted for some 30 years.

The center sits of 2.6 square miles of land and as well as the graceful orang utans you will also find birds, mammals, and reptiles roaming all over the forests.

The orang utans in the center have been released and are considered to be wild, but there are several feeding sessions a day when the animals may come to one of the main feeding platforms and this is your best chance of seeing them on a trip here.

The Sarawak Islamic Museum lies close to the Tun Abdul Razak Hall and has some seven different galleries that are dedicated to different periods of Islamic art.

All the galleries face a leafy courtyard and you will find a huge range of artifacts such as a replica of the sword that is said to have belonged to the Prophet Muhammad.

If you like religious history then this is not to be missed on a visit to Kuching.

12.Check out the Cat Museum

Kuching means cat in Malay, and as you will soon discover on a trip here, this is a city obsessed with cats.

To that end, make your way to the Cat Museum where you will learn all about the historical and cultural significance of these felines with over 2,000 cat-related exhibits on show.

Some of the highlights include a cat in mummified form that hails from Egypt and is said to date back 5,000 years as well as a mounted example of a Bay Cat which is a kind of wild feline that is indigenous to the island of Borneo.

As if all of that wasn’t enough, there are even sections dedicated to the story of Hello Kitty as well as the Broadway show Cats.

Certainly if you are looking for a quirky attraction to visit on a rainy day in Kuching then this is hard to beat.

13.The Architectural Wonders of the State Legislative Assembly Building

Kuching’s State Legislative Assembly Building is an architectural masterpiece. The elegant government building sits on the northern side of the Sarawak River near Astana. With a nine-pointed star as the roof and a combination of various cultural elements, there’s little wonder why this landmark is often said to be rated as the most magnificent architecture in Borneo. Tourists can get the best views from the waterfront.